What are the devastating effects of the Oak Processionary Moth?

The Oak Processionary is a moth whose caterpillars can be found in oak forests, where they feed on oak leaves, causing significant damage. They travel in nose-to-tail processions, often arrow-headed, with a leader followed by rows of several caterpillars abreast.

How did OPM start in this country?

The caterpillars of the Oak Processionary moth is a native of central and southern Europe but has become more widespread in northern Europe. The first sitings were in London 2005 , more than likely they entered this country as eggs on young trees which where then imported into Britain for planting here.

Landscapers, nurseries, landowners and woodland managers are being urged to take action after the Plant Health Service intercepted a number of cases of Oak Processionary Moth caterpillars (OPM) on trees imported from the Netherlands.

How does the Oak Processionary Moth effect Oak Trees

OPM caterpillars feed on oak leaves leading to severe loss of foliage and can increase trees’ vulnerability to attack by other pests and diseases, making them less able to withstand weather conditions such as drought and floods. The cases highlight the need for continued vigilance from industry and government to protect the UK’s trees.

Is the Oak Processionary Moth Harmful to humans and pets?

The caterpillars have tiny hairs that contain a toxin which can cause asthma attacks, rashes, lesions and in some cases sore throats and eye problems. This all happens as the hairs travel on the wind or if people (or animals) touch the nest. The caterpillars have up to 62,000 hairs and can stay active in the ground for five years. The moths once hatched only live for a few days in July and August. They will quickly mate and lay their eggs, the moths are brown with a wing span of 25-35mm and look similar to to several other species found in the UK.

As with humans animals can also be effected by OPM, sometimes the caterpillars walk along the ground, as they walk in large groups animals are intrigued by them.Dogs will go sniffing the ground and undergrowth and disturb the caterpillars, if you spot the following contact your vet.

OPM have reported in the South East of England, the biggest were recorded in Greater London from Kingston upon Thames to Brent. Some infestations have been found in Bracknell Forest, Slough and Guilford.

Small areas had also been found in Leeds 2009 and Sheffield 2010, Caterpillars were also found on a newly planted Oak tree in Wiltshire. Eradication of nests took take at the three areas, follow up surveys found no evidence of breeding.

OPM caterpillars were spotted emerging from egg plaques in mid-April, and trees were later treated on 23 April, the Forestry Commission added.

"The treatment programme is expected to continue until late May or early June," a spokesman said.

"After that the caterpillars will be too large to be affected by our preferred treatment product."

A gardener was clearing her overgrown allotment, she was unaware of the overhanging Oak tree which was infested with OPM.

The gardener said she had "severe reactions"

"My first symptom was a rash on my tummy. I was unaware of what is was and thought at first it was a heat rash,During this time I had spells of feeling violently sick. I thought I might have shingles.The rash got worse and the left side of my face became covered in this sore irritating rash. My left eye became very sore and weepy."

"I contacted my doctor and it was confirmed I had been severely affected by OPM and must keep away from the source as over time I had developed a severe allergic reaction."

If you suspect OPM, do not attempt to destroy or move material yourself as the nests and caterpillars can pose some risks to human health. 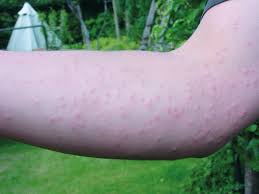 How do you spot Oak Processionary Moth symptoms?

What is being done to combat this disease?

Professor Nicola Spence, Defra Chief Plant Health Officer, said: “Since 2012 we have invested more than £37 million in tree health research, including a dedicated programme of research and development on oak.

“We will continue to work with local authorities and land managers to tackle OPM with a control programme of treatment and surveillance. In 2018, we introduced tighter restrictions on the importation of oak trees to England but are now looking at options to strengthen these even further."

The Forestry Commission, councils and land managers tackle the pest with an annual control programme of tree treatment. Increased measures to protect the country from the spread of OPM were introduced in 2018. Restrictions on the import of most species of oak into England have also been introduced as part of these regulations to protect native trees.

What can you do?

Anyone who has planted larger oaks imported from the continent should urgently check their trees for OPM and report any findings to TreeAlert. It is vital that these trees are checked now to minimise the spread of this damaging tree pest and protect the health of our oak trees.

If you suspect OPM, you should not attempt to destroy or move infected material yourself as the nests and caterpillars can pose some risks to human health. For more information on how to identify OPM please contact Bali click here. Alternatively if you would like any free advice or just a quick chat Teign Trees & Landscapes are always happy to help - Contact Us

OPM is an established pest in parts of London and the surrounding areas, but the rest of the country is designated as a Protected Zone. Swift action is being taken by the Plant Health Service to eradicate recent findings of OPM in Hampshire, Warwickshire and Gloucestershire, including surveillance, tracing work and destruction of both the caterpillars and infested trees. The Plant Health Service has also announced an urgent review of import controls on oaks.

Dr Anna Brown, Head of Tree Health & Contingency Planning, Forestry Commission, said: “Those of us involved in importing or trading plants must maintain our vigilance against exotic pests and diseases such as OPM. There is a lot we can do such as buying British, only buying stock from reputable, responsible suppliers and inspecting imported plants.

“Inspect, inspect and inspect again – we can’t check imported plants too often for signs of trouble. Don’t presume that because your supplier found no evidence of a pest or disease that you won’t either. You might spot something that they have missed.”

What does the future hold?

Extra measures are being out in place on most Oak trees to protect our native trees from OPM.The measures will only permit import of certain Oak trees if they com from countries that are free of OPM and have been grown under protection.

Defra have invested over £37 million into the research on tree health, working together with local authorities and land managers to irradiate OPM with a treatment and surveillance programme. 2018 saw tighter rules for Importing Oak trees to England, Defra are looking at options to further strengthen the rules even further.

The Defra funded & Forestry commission led programme is aimed at preventing OPM from spreading in protected zones. The programme includes.